Tissues: A group of cells having a similar structure and performing similar functions is called a tissue. Plant Tissues:  Meristematic Tissues: It consists of rapidly dividing cells. These cells lead to rapid growth in the plant and are thus located in actively growing regions namely, the root tip and the shoot tip. This tissue keeps
Read More

Chemical Coordination in Plants: Plants do not have a nervous system but they coordinate their activities by means of some chemicals called the plant hormones or phytohormones. Depending upon the effect on plants growth, phytohormones have been grouped into the following categories-   Growth Promoters – These are the phytohormones which stimulate the growth of
Read More 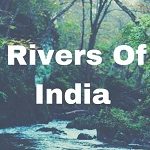 Rivers of India Important Facts: The Indus System: Indus:  also known as sindhu. Westernmost Himalayan river. Originate from a glacier near Bokhar chu in Tibet region. it enters India in the ladakh district of J&K. Mountain range – Kailash. in Tibet, Indus is known as Singi Khamban  or Lion’s mouth. Several tributaries like the Zaskar,
Read More

Digestion Process: The process of digestion involves intake of the food (Ingestion), breakdown of the food into micromolecules (Digestion), absorption of these molecules into the blood stream (Absorption), the absorbed substances becoming components of cells (Assimilation) and elimination of the undigested substances (Egestion). Digestive system includes the alimentary canal and associated digestive glands. Alimentary Canal
Read More

Autotrophic & Heterotrophic Nutrition: Nutrition : Food is required by all the living beings to survive. Food contains various nutrients. The process by which the food is obtained and considered by living organism to get energy and various other materials for the growth, repair, development and maintenance of the various body parts is callednutrition. Modes
Read More

Gupta Empire Important Facts: The founder of the Gupta dynasty was Sri Gupta. He was succeeded by Ghatokacha. These two were called Maharajas. Chandragupta I (320-330 A.D.): Was the first independent ruler & called himself ‘Maharajadhiraja‘ (the great king of kings). Married the Lichchavi Princess, Kumaradevi, which was politically very strategic for Gupta empire. He
Read More

Pre-Gupta Period Important Facts: Indo-Greeks: Demetrius was the first foreign king after Alexander who carried Greek army into India about 190 B.C. & conquered North Western part of the Mauryan Empire. Most famous among Indo-Greek rulers was Menander who reached Pataliputra. His capital was Sakala or Sialkot. He was converted to Buddhism by Nagasena or
Read More