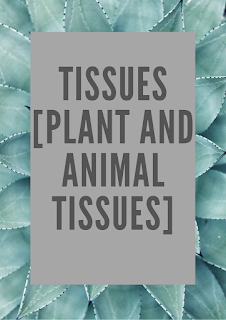 Tissues – A group of  cells having similar structure and performing similar functions is called a tissue.

1:- Meristematic Tissues – It consists of rapidly dividing cells. These cells lead to rapid growth in the plant and are thus located in actively growing regions namely, the root tip and the shoot tip. This tissue  keeps on dividing throughout the life of the plant. The cells of this tissue are thin-walled and closely packed without any spaces in between. The cells are almost alike irrespective of their location and may be round, oval, or polygonal in shape.


Meristematic tissue divides rapidly and forms a large number of cells. These cells undergo gradual changes and acquire specific functions and form the permanent tissue. As the meristematic tissue keeps on adding new cells to the plant body, it results in the growth of the plant.

2:- Permanent Tissue – It consists of non-dividing cells. These cells have lost the power of dividing and have become specialised to perform specific function. They have diverse shapes and sizes that suit the function they perform. Cells of permanent tissues are derived from the meristematic tissue and may be thin-walled or thick-walled, living or dead. Since this tissue has acquired a permanent structure, it is called a permanent tissue.

Permanent tissues are of three types –

1:- Dermal Tissue –
2:- Ground Tissue – It forms the main bulk of the plant body. It provides mechanical support to the plant. It extends from beneath the dermal tissue to the centre of the plant.
Ground tissue can be of three types :-
3:- Vascular Tissue – The term vascular is derived from a Latin word meaning tubes and vessels. It is a conducting tissue which transports water, minerals and food to different parts of the plant. This tissue consists of long cells placed end to end to form long pipes or tubes.
Vascular tissue is of two types:-
Animal Tissues – In multicellular animals four main types of tissues are found – Epithelial tissue, Muscular tissue, Nervous tissue and Connective tissue.
1:- Epithelial Tissue –
2:- Muscular Tissue – It causes movements of limbs and internal organs and also locomotion of the organism. It is found in every part of the body which shows movement. Muscle tissue is a bundle of muscle cells which contract forcefully and again return to the relaxed state. This ability of the muscle cells to contract and relax is called contractility. Muscle cells are thin and elongated and are often called muscle fibres. In higher animals some muscles are attached to the skeleton while some others form walls of internal organs like heart, stomach, intestine, urinary bladder and blood vessels.
The heart is largely made of muscle tissue which gives it ability to contract and relax repeatedly. Food moves forward in our stomach and intestine because of the repeated contractions of their muscular walls. Based on their structure and function muscle tissues can be classified to three types-
(a) Skeletal muscles or striated muscles – These muscles are attached to the skeleton and hence the name skeletal muscle. The skeletal muscle is made of bundles of long, unbranched, cylindrical cells that show transverse striations (stripes or bands) which give them their other name, strirated muscles.
The striated muscles can be moved at our will. Therefore, they are also called voluntary muscles. This is the only type of muscle which is in our control.
For example, the muscles involved in locomotion are voluntary muscles.
(b) Smooth Muscles – Smooth muscle fibres are long and spindle shaped. They do not show any stripes or striations and are therefore called smooth muscles. They are involuntary muscles, i.e., the movement of these muscles is not under our control. They are found in the walls of most internal organs like stomach, intestine, urinary bladder and blood vessels. These muscles bring about movement of food in the alimentary canal, movement of urine in the urinary ducts and in the urinary bladder and movement of blood in the blood vessels.
(c) Cardiac muscles – are found only in heart. They are involuntary muscles. They go on contracting rapidly but rhythmically throughout one’s life without tiring. Cardiac muscles fibres have striations like the striated muscle fibres but are branched forming junctions with neighbouring cells.
3:- Nervous Tissue – It is found in the brain, spinal cord and nerves. Nervous tissue is made of specialized cells called neurons. A typical nerve cell has three parts.
Several nerve cells are collected into bundles and covered by a connective tissue covering to form nerves. These nerves carry messages from one part of the body to the other. Nervous tissue is not present in all animals. Lower animals like hydra have very few nerve cells.
4:- Connective Tissue – The prime function of connective tissue is to bind together other tissues and support various organs of the body.It fills up the space between the organs, thereby forming a packing around organs.

Bone – is a hard connective tissue. The hardness is due to the presence of calcium and other minerals in the matrix. Bones support the body and provide framework for body movement. Bones protect internal organs like brain and heart.
Cartilage – is a flexible tissue found in ear lobes, nose tip, trachea and between vertebrae. Cartilage provides support and flexibility to a region where it is present.
Tendon – Muscles are connected to bones by means of bands of strong and flexible connective tissue called tendons.

Ligament – Bones are connected to each other at the joints by tough, yet flexible connective tissue bands called ligaments.